I’ve celebrated Christmas the exact same way for my entire life. As Germans, we celebrate on Christmas Eve with a traditional German meal, evening mass, singing German Christmas songs out of tune, eating way too many cookies, and opening presents in the living room.

This year was a little different.

To save ourselves the trouble, we booked a Christmas Eve in Bethlehem tour from Tourist Israel, also known as Fun Times. I’ll just say this: it did not meet our expectations.

3:00pm: Meet up with about 175 other tourists all confused as to where to go.

3:45pm: Start tour. Wind our way through Old City’s narrow alleys with one guide leading 60 tourists to the packed Church of Holy Sepulcher.

5:30pm: Meet back at Jaffa gate and scramble to find a seat on the bus. Sleep on way to Mount of Olives.

6:32pm: Leave Mount of Olives’ viewpoint and sleep on the way to Bethlehem.

7:30pm: Drop off at Olive Wood Factory with about five buses, where everything is 50 percent off (Christmas special!) and there’s room for about 50 people.

8:15pm: Five-minute drive to dinner. Eat delicious buffet meal, laughing with an eclectic mix of people from around the world about the disfunction of this entire trip.

9:30pm: Push our way onto tour bus and head to Bethlehem’s city center.

10:30pm: End up at bus station and walk to Manger Square, which felt more like a World Cup rally than a Christmas Eve service.

11:00pm: Walk to Chapel of the Milk Grotto, where crowd mentality shoves half of us through the gates for five seconds until we were kicked out. 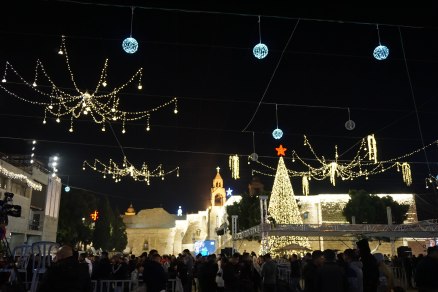 12:00am: Drink tea and/or beer while watching the service in the restaurant next to Manger Square from a television. The irony of the situation was not lost on us.

12:40am: Leave restaurant early to make sure we get a spot on the bus back to Jerusalem.

2:00am: Arrive back in the apartment, completely exhausted.

It was a tour to remember. Not one that I’d recommend, as its disorganization and mass chaos ruined any sort of Christmas spirit that this day held.

So, we decided to go back two days later, when the city would be a little quieter.

Hopping on the 231 bus to Bethlehem, we took in the sites that we had missed before in the dark. Sitting on top of a hill, Bethlehem is a holy place for Christians, as the birthplace of Jesus.

What I didn’t know was that it is located in West Bank, Palestine. That means you need to bring your passport! Crossing over the border, you can immediately see a stark difference in the culture, appearance, and the way business is run. Trash litters the street, and the country feels less developed.

Palestine is an Arab country with a strong 93% majority of its population practicing the Sunni branch of Islam. Its history is contentious, and not what I want to cover. Quickest history lesson, ever. At the end of World War II, the United Nations portioned what was considered Palestine into two states: a Jewish state and a Palestinian state. Today, the two parts of Palestine that remain are separated by Israel and are called the West Bank and the Gaza Strip. 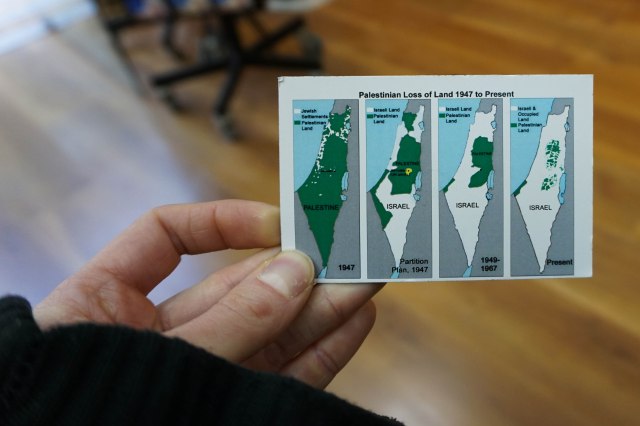 I didn’t even realize that I assumed Bethlehem would be inhabited by Christians and Jews. It was yet another wakeup call about all of the false assumptions I make about the world that I don’t even realize I make. When I’m living in the US, it’s easy to assume everyone lives similar to how I do. The beauty of traveling is that it makes sure to kick me in the face with the truth that I live among one of thousands of realities.

Winding up and down through narrow alleys, the marketplace on the way to Manger Square was loud and full of life. Women were shopping for food, clothes, and items. Men were yelling out their items and prices, trying to get more attention and sales than their neighbors.

The predictable chaos in the marketplace made me smile. It reminded me of other marketplaces I’ve been, and it made me feel at home. It’s something that makes me sad that we don’t have in the US. As a tourist, I feel as if I’m a part of life there, if only for a brief moment.

The main reason for our second visit, the Church of Nativity is the place of Jesus’s birth. The oldest site continuously used as a place of worship in Christianity, it is regarded as the oldest major church in the Holy Land. 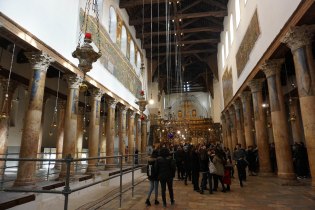 The spot where Christ was born is marked by a beautiful silver star. The chaos that ensued into getting there gave us flashbacks of our time in Bethlehem on Christmas Eve. Mob mentality ruled as hundreds of people tried to cram their way through a small door. People continued to shove their way downstairs and crowd around the manger. The trick was figuring out how to kneel down to see the area. There was no way to take any sort of photo. 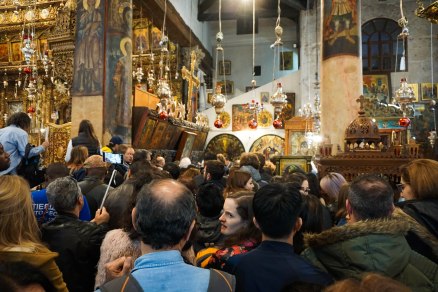 We also walked to the Chapel of the Milk Grotto, the place where Mary, Joseph, and baby Jesus found refuge during the Massacre of the Innocents before fleeing to Egypt. The name comes from the story that one drop of Mary’s milk changed the color of the cave.

Our last little stop of the day was for Claire and Manuel. The one thing they had come here wanting to purchase was a nativity set. They had seen many nativity sets in the souks of Jerusalem, but none had seemed right. We walked into the aptly named Christmas House store, where they found “the one.” After much back and forth, and a couple hour lunch break to think it over, they ended up buying the set. 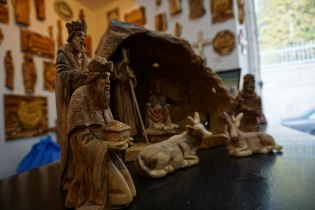 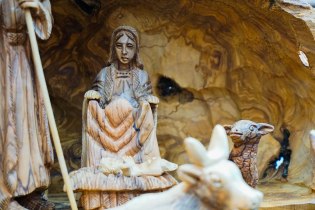 It was a beautiful day, but one marked by continuous chaos, from the markets to the church to the restaurant.