A huge complex, the Israel Museum is home to many internationally-renowned treasures. The most prized of all those pieces, the Dead Sea Scrolls, is held in a majestic white dome.

Thousands of fragments of written scrolls were discovered near the Dead Sea in 1946. About 20 percent of the written pieces were biblical texts. A small number have been well-preserved, most notably the Great Isaiah Scroll. Written in Hebrew, it is the oldest complete copy of the book of Isaiah. Today it lies in the hands of the museum.

The grandeur of these scrolls is magnified by the architecture that houses it. The beautiful white dome is juxtaposed with a granite black wall to symbolize the Sons of Light and the Sons of Darkness. The museum also developed an audio play to highlight life during the time period ~400 BCE.

The rest of the museum was too overwhelming for my five-hours-of-sleep-jet-lagged brain to handle, so I mostly zombied my way through it. You could spend weeks in that museum, piecing together different parts of history from reliving ancient history through important archeological findings to contemplating modern art to viewing classic Islamic architecture.

My favorite part was wandering through the Art Garden, which features modern and abstract sculptures. The beautiful pieces were placed within a Japanese Zen garden and against the backdrop of the rolling Israeli hills.

One part of the museum that was really fun to enjoy was in the art garden. Pieces were donated from all over the world. I’ll let the works of art speak for themselves. Okay, I’m also including a few words, because I’m me and I like to write.

Not pictured: a giant apple core and a flying rabbit, among many other strange and beautiful pieces. 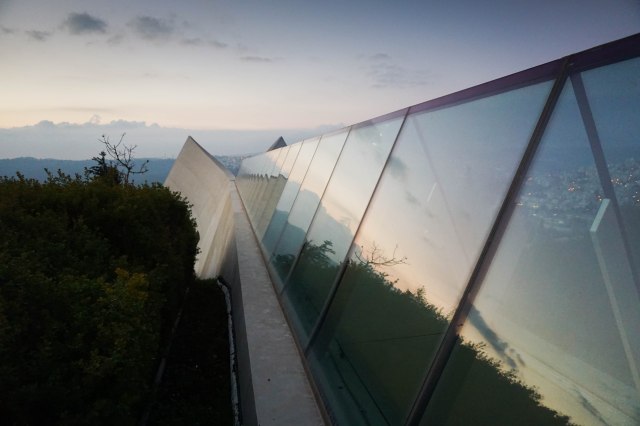 The design of this museum is what sets it apart from the many others I’ve visited across the world. Appealing to the modern architecture design of Berlin’s Holocaust Museum, Yad Vashem symbolizes the tragedy of the Holocaust Museum in Berlin through a 180-meter-long incomplete triangle. The top is a long giant skylight, meant to represent the survivors of the Holocaust. Just as the Final Solution wasn’t finished, neither was the triangle.

I’ve visited all different kinds of museums and memorials in Germany, Poland, Estonia, Latvia, and Lithuania. I’ve heard heartbreaking stories like these dozens of times. I’ve read Night by Elie Wiesel. I’ve visited a concentration camp just outside of Berlin. This museum was sobering in a new way. Dates, times, and numbers are explained through beautiful storytelling—through a shoe, song, video, or photograph.

I walked through the exhibit mostly alone. A deep, lonely sadness crept into my heart. The Holocaust is a part of my history as a German whose family was involved in the war, on the front lines, in the air, and on the sidelines. I feel like it’s my responsibility especially to listen and remember these stories, to always question authority, and to never let this kind of vicious, intoxicating mindset of superiority creep into my life.

The one story that left me the most haunted was by far not the most gruesome or sad. Nonetheless, it left me heartbroken. In 1938, through the Kindertransport, or children’s transport, program, approximately 10,000 Jewish children were sent to the United Kingdom after the devastation of Kristallnacht solidified the terror in Germany.

This story was one of a father and his boy. Ever loving, he made sure his son ended up in Great Britain through the Kindertransport. He kept in contact with his son’s foster parents in the UK. Despite harsh conditions, he wrote his son as frequently as he could. He even sent him a German puzzle game that the museum had kept next to his handwritten notes. It didn’t take long until the father stopped writing. The two never saw each other again.

This is a harrowing message, but one so very important to the history of Judaism. Unfortunately, it’s one so very important to the present-day reality many Jews still live in today. Shockingly, it seems we haven’t learned our lesson. Anti-Semitism is alive and well across the world. The bombing in the Pittsburgh synagogue happened less than two months ago and was the deadliest attack on the Jewish community in United States’ history.

This fear of others, this hatred needs to be eradicated once and for all. I hope that by sharing this little story, I remind you to remain inclusive in all that you do. Recognize your fear of others and shame, question, and discourage that fear until it no longer exists.

No matter what race, color, or creed you are, it is human nature to form an in-group and an out-group. Actively work against that. Find the humanity in the person you don’t know. Step outside of your own comfort zone and meet people where they are. Get to know people, their likes and dislikes, who are different than you. We are all humans after all, with the same hopes, dreams, and goals of living our best lives.

A quick light rail ride back into the city center, we mustered enough energy to wander through the city’s food markets. One of my favorite things to do while traveling, you get a much better picture of local life. This market sat in stark contrast to the quiet, reverent nature of Yad Vashem. Vendors shouted to grab our attention, offering us free samples of granola and dried fruit tea mixes. The bustling street as in full swing as we meandered down, taking in the treats and life swirling around us. 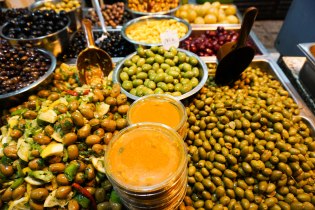 With some energy left, we grabbed a drink crammed in the back of the sushi place, where we shared good conversation and laughs. A spontaneous stop at a shawarma stall, we each grabbed a massive dinner and headed back to our hotel, exhausted after a day full of emotions and impressions.