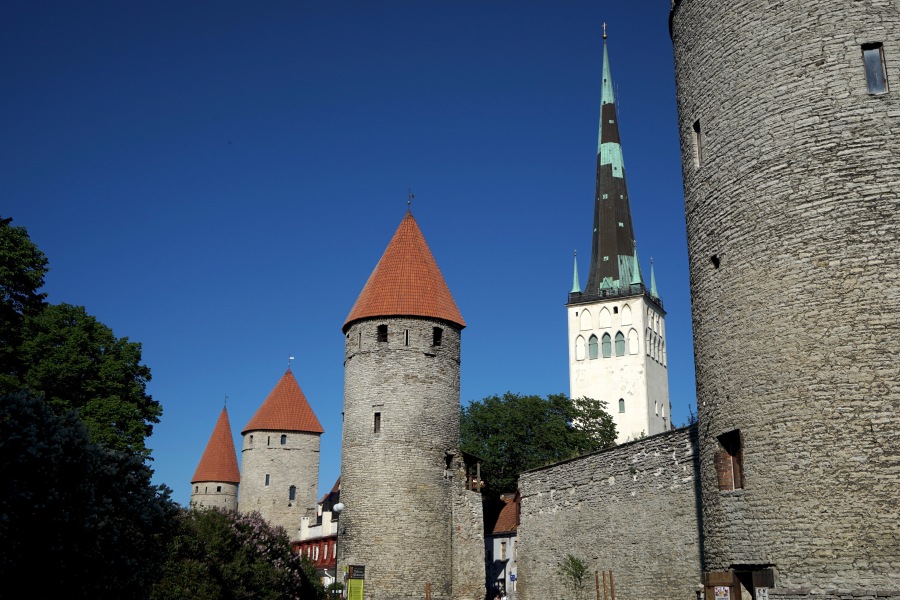 June 18, 2017
Currently: Sitting in the Lisbon airport waiting for flight two of three to the USA.

The Gothic spires, the huge plazas filled with markets of useless trinkets, the narrow cobblestone streets, the overdone medieval tackiness, and the impressive remnants of a wall containing the town’s charm. These are a few of my favorite things! They make Tallinn an enchanting trip back in a time of unicorn dust and barbarians.

Tallinn’s history begins 9,000 years ago with hunters, fishermen, and gatherers. But nothing really exciting happened for 8,000 years, so I’ll skip ahead to the good part. Well… not “good” for Estonia, as we can assume based on the other two’s histories.

These massive city walls are a point of pride for Estonians. They held off this guy called Ivan the Terrible. You can still see his failed attempt from the cannonballs lodged into the walls–something you wouldn’t even notice if someone didn’t point it out to you. Cannonballs are a lot smaller than I expected them to be.

Then there were some kingdoms with some good times and some bad times. Shout out to the Swedes for actually caring about the people and bringing the first public high school and university to the country.

Another significant moment in time was 1918 when serfdom ended. Power to the people! Too bad it took Estonians about 50 years to wake up and gather themselves for a “national awakening.” Novel thought: Estonians should rule Estonia. Here’s how it went down… Poor Estonia…

So something I haven’t mentioned yet about the Russian occupation is probably one of my favorite stories: the Baltic human chain. Over two million people held hands on August 23, 1989 from Vilnius through Riga to Tallinn as a peaceful political demonstration spanning ~420 miles. Lithuania and Estonia still squabble like siblings about who was the “start” and who was the “end.”

(Of course, China came in a little bit later and took the title, but that’s not important.)

During the occupation, Estonians never lost their culture. The Singing Nation, Estonians actually won their independence by song. One day during a usual Parliament sesh, members of the resistance declared independence. The Russians didn’t approve, so they had troops surround the building. The resistance leaders cried out for help from Tallinn residents. Those residents ambled up the hill and surrounded the Russian soldiers and sang. Russians were baffled. They didn’t know what to do, so they just left. And that’s how Estonia finally achieved the independence they maintain today!

Estonia as a culture still maintains that same grumpy front we saw in the other Baltic countries, but they do know how to have a good laugh at themselves. For example, their language has no future tense and no gendered nouns. Therefore, they have no future and no sex.
Today, Estonia prides itself as being Finland’s younger brother. (Finland is unaware of this relationship.) As a small country always proving their worth, Estonia is proud of any and all accomplishments. Like really proud. Our tour guide, Henri, was very adamant in making sure we knew that Skype came from the mind of an Estonian with Swedish money. Oh! And their tax system is amazing. Anyone can do their taxes in three minutes or less. IRS, are you listening?

And finally, because I can’t go to a country and not mention the food. Estonia was so unexpected. I ate vegan pretty much the whole time. I’ve been really impressed at the options for vegan, gluten free, lactose free throughout the entire trip. I was always able to eat relatively healthy, and I am coming back armed with new ideas on how to incorporate new ingredients like buckwheat and beets into my diet. Here’s a delicious buckwheat stew I got from an adorable restaurant, Boheem, in Kalamanja, a quiet little neighborhood just outside Old Town.

I loved Tallinn. I loved Riga. I loved Vilnius. I couldn’t choose between the three if I tried. I felt wholly comfortable and intrigued by each country. I loved their different little takes on life and their history.

Oh, and because I have to commemorate the night that was the Monk’s Bunk Hostel bar crawl: rocked flip cup, stacked a cup against the master Belgium player, danced until 4am and walked home in broad daylight. Oh, and I found Saarlanders! Thanks y’all for another crazy night out. PSA Announcement: Don’t expect many females on bar crawls in the Baltics.

Alright that’s it! Sorry for the long post. All these airplane time give me lots of time to write 🙂