November 27, 2015
Currently: Enjoying a sunset view at a rural lake at our campsite somewhere in Rajasthan 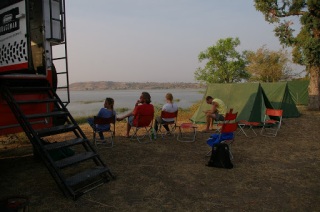 Ranakpur is a small village located somewhere between Jodhpur and Udaipur known for its fabled Jain temple. I can vouch and say it is without a doubt the most beautiful temple I’ve ever seen. Ever, ever. It even beats out Chang Rai’s Wat Rong Khun (though that is still a must-see). The craftsmanship behind this temple is a true homage to the beautiful religion it represents. I gave you a taste of Jainism earlier, but I can’t stress enough how alluring this religion is. I’m drawn to it like I am Buddhism, especially in two of its values that I believe the world could never have enough of. Anekantavada, or non-absolutism, preaches open-mindedness. The basic idea is that everyone has a different perspective and differences in opinions and beliefs should be respected. Tolerance. Remember the parable of the blind men and the elephant. And aparigraha, or non-attachment. Material things aren’t important to Jains. Don’t take more than you need. Share your wealth and possessions. Holding onto things is what leads to direct harm not only to others but also to yourself. Swirl those ideas in your head while you take a mini-virtual tour of this temple. 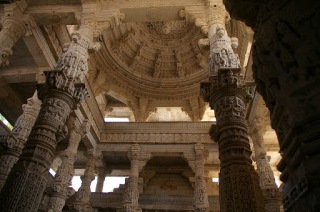 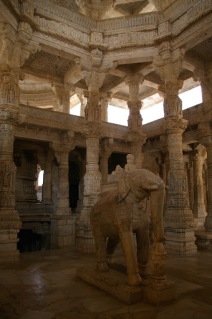 As you can see, I had zero chance of containing the photographic nerd in me. When in a beautifully ornate Jain temple with a portrait lens burning a hole in your pocket and a tour guide/photographer at your disposal… what’s a girl to do but have a serious photography session! 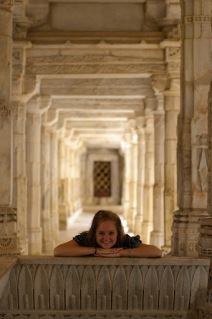 On to Udaipur! This city is known around India as one of the most romantic cities, burrowed between the rolling foothills of the Aravalli Range and nuzzled next to the spectacular Lake Pichola. It holds a kaleidoscope of attractions. Fairytale palaces, sprawling gardens, narrow alleyways, and lush mountain views make this city’s storied and chivalrous history come alive. And if I haven’t sold you yet, it was voted “Best City in the World” by Travel + Leisure magazine in 2009!

Founded in 1559 after a hermit blessed the future grounds of its famous City Palace, Udaipur was the capital of the Mewar kingdom. It escaped the Mughal influence (including Akbar’s grip if you can believe it) because its hilly location provided too complicated for the Mughal horses to reach. With two full days here, we had all the time in the world to explore its charm. And we were right in the middle of it all – and by it, I mean a Thamel-inspired tourist district filled with handicraft stores complete with nonstop hustling storeowners all claiming the lowest prices in town. The biggest attraction is the City Palace, where you can roam the gardens and amble through a neverending maze of a museum.

City Palace from the grounds 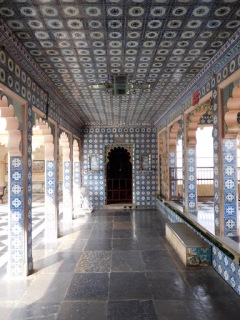 so ornate!
The other main attraction is the Jag Mandir, or the Lake Garden Palace, set in the middle of Lake Pichola. The palace was a summer residence for the royal family, but has also served as a sanctuary for asylum seekers in the past. It’s also the setting of the infamous Octopussy Bond movie from the 1980s. Across the way in the same lake, the aptly named the Taj Lake Palace is constructed only of white marble and sits like a float on top of the water. If you’re wealthy enough, you can stay there at a five star hotel. I just drunk in the free view from a distance…because #budgettraveler. 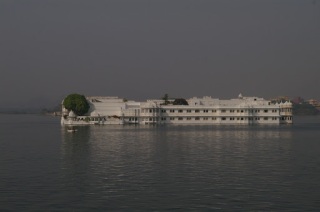 Taj Lake Palace
Beyond that, I did my favorite thing and something I try and do in every city: get lost. Mike, as always, was my partner-in-crime and we ended up stumbling into a local Tibetan market. We were actually left alone for once (if you ignore the perpetual staring, of course)! The only thing missing was an authentic momo stand to polish off the experience. If you get away from the tourist district, you really can get a pretty good sense of the local Udaipur lifestyle.
It seems crazy to me how much I’ve changed in my time traveling around India. I’ve grown so confident and comfortable, no matter what city I’m thrown in. It all works out in the end, and you really do get used to the customs and staring that go along with being a tourist in India. I would have been plenty happy to dream away more beautiful days in this city, but onwards we must trod in our journey as tourists.
Lots of love,
Lena