End of part two of three came and went with Delhi. We had to say goodbye to some really incredible people – Kerry, Rachel, Emma, Glen, and Elaine! They were all such great fun to have on the trip and it was sad to see our time together come to an end. I wish everyone safe journeys onwards for those continuing their travels and safe flights home for those … well going home!

Delhi is very metropolitan (many plus points for their insanely awesome metro system). It definitely went against all my expectations. I was expecting a more Kolkata-like experience, especially when the second we got off the truck we were accosted, and I do mean accosted, by a small child beggar. She was daringly aggressive, going so far as to grab our legs, clothes, bags and refused to leave even with hotel staff chasing her away. It was both heartbreaking and maddening. It wasn’t like the other beggars we’d witnessed before. This was targeted and almost barbaric. I feel awful using words like aggressive and barbaric to describe the actions of a child, but it felt that way. To know that this child has been raised to act like this towards foreigners is distressing. I feel so helpless in these situations. What should I do? Is there even anything I could do? I know it’s a part of traveling, but I will never get used to it. On principle I never give money to beggars, because I don’t want to contribute to any sort of begging scam or culture. The begging industry in India is real and ever so complex. Just to give you some ideas of numbers, India has been quoted as having the highest level of child labour in the world, accounting for 7% of its workforce with estimates from 20 million in total up to 44 million children out of school and at least 300,000 of them as beggars (Child Labour in India – An Overview; Child Labour in India). The reality is many of the families of these children rely on the income produced by the child, whether they are working jobs or simply begging on the streets. The begging industry has been estimated to reel in Rs 1.5 billion (~$22.6 million) in Delhi alone. But, let’s not forget the Slumdog Millionaire reality either (recap: gangs maim, throw acid on, blind, threaten/torture, underfeed children to increase begging profits). I could never live with myself if I unknowingly contributed to any business that forces these conditions on children. Looking back on that girl with caked hands, mangy hair, and wild eyes, I haven’t seen that level of desperation before. Especially not in a kid. It pulled at my heartstrings and made me wonder the story behind the desperation.

Sorry for the dark tone, but it’s not something I wanted to overlook. It’s better to have a conversation (or at the very least, one-sided commentary) about it, than to simply brush it under the rug. But for now, I want to move on to all the other sights and impressions Delhi made on me. We had a wonderful day tour through Old Delhi that began with a visit to the largest mosque in India, Jama Masjid. It was kind of expensive to take photos there, so you’ll have to google some images to see what I saw! Or visit Delhi. Much better idea. We also checked out some spice markets and climbed up on top of a terrace to get a beautiful view of some old colonial style buildings. 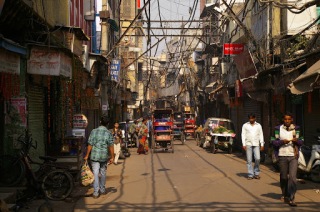 a glimpse into Sunday mornings in Old Delhi 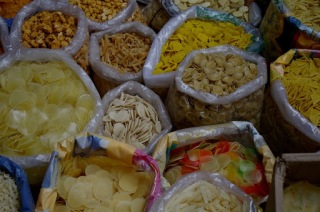 dried pastas and other Indian things 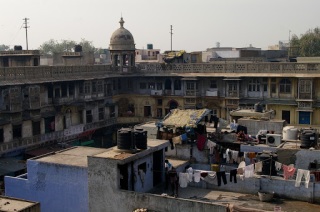 colonial rooftop view
After a fuel stop at a famous paratha restaurant, we continued to the Gurudwara Sis Ganj Sahib, a Sikh temple. The gurudwara (literally translated as Gateway to Guru) is a place of worship for Sikhs that oftentimes contains a hotel, kitchen, and school. Our guide was Hindu, but couldn’t stop singing the praises of the Sikhs. He told us Sikhs are by far the best “kind” of Indians. He described them as a hard working lot with giving souls. You will never find a Sikh beggar, a lazy Sikh, or a heartless Sikh. So what is it about Sikhism? It actually sounds like a lot of other religions. Sikhism is a monotheistic religion originating in the 15th century. It preaches truthful living, selfless service, and social justice for all. The difference is their practices wholly mirror these words. The temple is the perfect example. It is open to anyone regardless of race, religion, or caste. Sikhs and volunteers host meals several times a day feeding over 40,000 mouths every day free of charge to anyone. The temple also has a hotel, where people who have lost their job or are visiting Delhi can stay for highly discounted rates. It’s a fascinating religion and one that other religions should be taking pointers from. 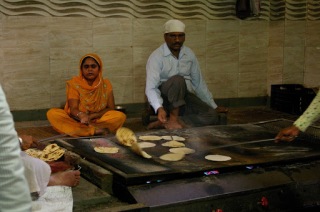 at the impressive rate of 3,000 chapatis/hour – all by volunteers! 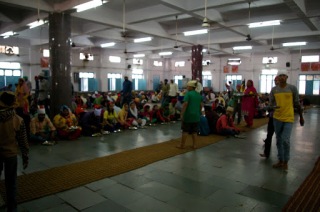 free food for everyone
Besides scouring the Janpath Market for souvenirs, my last exploration around Delhi was of a slum also known as Sanjay Colony. This colony is more of a community that survives on two key industries – clothes recycling/manufacturing and the factories that surround the slum. Its narrow alleyways and sewage-ridden streets are abound with children playing and adults running their small shops. Really not much different to daily life in Delhi. Despite the filth and general lack of basic human necessities, people are happy there. Even when they have the money to, they don’t leave. They have what they need and the community is that invisible and unbreakable tie that binds it all together.
As a bonus we got to visit the Karni Mata Temple, home to 20,000 holy rats. Karni Mata is actually a Hindu woman worshipped by people as being a reincarnation of the goddess Durga. One of the folklores goes that 20,000 men ditched their service in the army before a battle and escaped to Deshnoke. Upon arrival, Karni graciously spared their lives and sentenced them instead to life as rats, providing this temple as their home. The army was so grateful for their twist of fate that they all promised to serve her devotedly. 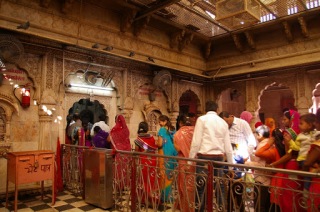 they are cute…….not
So that’s Delhi. And the rats. I’m ready to start my Rajasthani experience. More to come soon on the wonders of a golden city!
Lots of love,
Lena