November 8, 2015
Currently: Tumbling along a twelve-hour truck journey to our next destination of Khajuraho

After Kathmandu, we took the newbies to Chitwan where I participated in a grand total of zero activities. As my almost halfway point throughout my trip, I took a little me-time to enjoy the Rhino Lodge, do some laundry, read lazily on the porch, and amble through the village. It was a great break from the constant movement that you sign up for when doing these overland trips, so I was grateful to have that time.

Onwards to India, our next destination was Varanasi, which is the holiest of the seven sacred cities for Hindus. To give you some idea, you could equate it to Mecca for Islam. Set on the banks of the Ganges river, Hindus pilgrim here to wash away their sins in the holy river water and cremate their loved ones. This river, however, is infamous for more than one reason. Its waters are so polluted that the fecal bacterial count is 100 million per 100 ml. Holy shit indeed! Despite the obvious state of this water, thousands of Hindus purify themselves every morning through a ritual bath. Because of the Ganges’ reverence, it is unsurprising that the elderly and sick come to this city to die, because this city is the closest earthly path to salvation. Along the river, there are over 80 ghats, where bodies are cremated and ashes thrown into the river.

Our morning exuded this quiet sense of foreboding and gloom. We woke up for sunrise prayers on the river and to experience the ghats on a morning boat ride. Streets were oddly empty as we snuck through alleyways, making sure to avoid the dozens of sleeping cows. The eeriness of the morning only amplified at the riverside. We witnessed the soundless daily proceedings of the locals. With the creaking of the oars and the distant splashing and praying along the shorelines as our only music, we glided through the murky waters, passing ghat after ghat. The pollution haze dimmed the usual vibrancy of the morning sun, so the ghats slowly came into clarity with the passing minutes. The eeriness of fires and the rituals of a funeral were a perfect match for the mood. The spell of the morning finally broke with the sun overtaking the haze, spilling streams of orange across the Ganges. It livened up the sky and gave promise for another hot day in India. The tuk tuk (also known as the posh bike) ride was a reckless, stomach-lurchingly, good-natured race home. 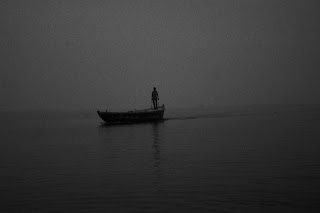 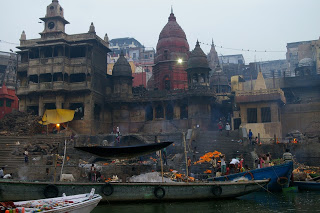 One hot breakfast later, we took off in our respective tuk tuks to the Mother India Temple, which has a fascinating relief map of India inside.

A quick race took us to our next destination of a silk factory. We saw the life of the factory in its hand woven silks and its machine-made silk blends. The sad reality for these weavers is a mere 100-250 Rupees per day for their tedious work. The government has had to step in several times to preserve this art form from extinction. The best/worst part of the tour was the hour long sales pitch about the high quality of this silk compared to all other silk in India. It was a strange marketing pitch, since it used guilt in such a weird way. I tried to calculate out exactly what percentage of the sales the workers took home, considering how many artists were needed for the piece, how long it took for the artist to complete it, and the price of the artwork. However, I was excited after the pitch when I got to try on my very first sari. I crossed that off my India bucket list! 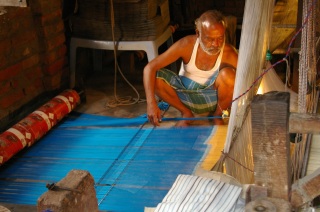 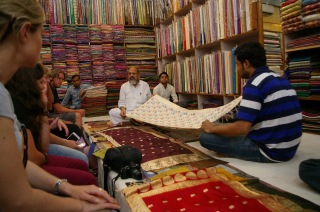 The rest of the afternoon was free time that Mike, Kerry, and I took full advantage of. We managed to find ourselves in the middle of the madness of a bustling local market alleyway.

a glimpse into the chaos

After over half an hour, we finally worked our way to the Kashi Vishwanath Temple (or the Golden Temple). This temple, dedicated to Lord Shiva, is also necessary for Hindus to visit to achieve moshka or liberation. A widespread belief supposes Shiva himself blows the mantra of salvation into the ears of the people who die of natural causes at the temple. We then ended our evening with a walk along the ghats, since it really is the main attraction of the city. Once again the little snippets of conversation and ensuing laughs were the real treat of the evening. That and the contrasting peacefulness of the riverside from the earlier chaos.

Varanasi was not what I expected. And probably because of that, it was a definite highlight of my time here in India so far. I experienced the classic madness of Indian city life tempered with sacred Hinduism rituals shrouded in mystery. I can’t wait for the continued surprises that lie ahead.