Things I’ve learned since I last posted: it only took me six weeks to realize I’m reading the wrong edition of my textbook, planking originated in Australia, I’ve met an Australian pirate, Brisbane is twenty-first most livable city in the world (sorry Indianapolis, you didn’t make the cut), and I’m really good at procrastinating on writing this blog. But not to let you (or future me) down, I’m filling you in on the most exciting parts of the past two months here. Just think of me as an adventuress extraordinaire…
ADVENTURE #1: Mt. Tibrogargan
Friday August 12, 2011
It all began a fateful Saturday night with a Mexican fiesta and some tasty tequila margaritas.  There I met a fellow self-pronounced adventurer extraordinaire who had plans to go climbing up a mountain (volcanic plug of an ancient 27 million year old volcano if you want to get all specific about it).  Who am I to say no to an adventure? A week, three Americans, three Australians, a bag of lollies, and an hour car ride north later we were at the base of Mt. Tibrogargan.  The climbing was described to me as the most intense legal rock climbing allowed without ropes.  Legal being key word.  I smell another adventure on the horizon!  We established a new term for this mix of climbing and hiking: clambering.  We hiked a rock-riddled path for about a quarter of the way and then met a wall of rocks.  Challenge accepted.  Not to give myself too much credit, the rocks were slanted with lots of ridges to hold onto.  One hour later we made it to the summit where we enjoyed our packed lunches, complete with juice boxes and cookies (thanks Union!), and had a nice nap to reward ourselves.  The way back down involved a new form of climbing I call butt-sliding.  After a few precarious drops and a re-evaluation of my poor life decisions, we made it back down to the base. Next stop was, obviously, a strawberry farm.  Needless to say we picked the best strawberries ever and ended the adventure with the sweet, sweet taste of victory and strawberry stains on our hands.  Success.
clambering

enjoying the view with my pb sandwich

view with the other Glasshouse mountains

ADVENTURE #2: Gold Coast Hinterland
Saturday August 13, 2011
Before you get too excited, there was neither gold nor coast to be found in this adventure.  After a very early morning and a few battles between the bus and a steep hill, we made it to our first lookout point.  Don’t let Australian weather fool you.  If you are up in the mountains, it will be cold.  So don’t be an idiot like me and forget a jacket!  At the first two lookouts I saw Australia’s beautiful and mountainous countryside that I saw a glimpse of just the day before.  The main chunk of the day was taken up by a four kilometer hike down to Purlingbrook Falls.  There we sat on some rocks and ate our peanut butter sandwiches while some crazies decided jumping into freezing cold water would be a good idea.  I was cold enough without a jacket thank you very much!  Next on the agenda was checking out some glow worms.  Yup, these worms create light and when you’re surrounded by them it’s as if you’re staring into a starry night sky, except the stars are right in front of you.  Who knew worms could be so romantic?  After the worms we fed some beautiful and very greedy birds.  The lady in charge kept handing us bird feed.  I politely stopped accepting after two birds battled it out for food less than two feet in front of my face.  I have war wounds from this terrifying encounter (scratches are not shower friendly).  The final stop of the day was less than exciting.  Exhausted from two days of hiking, I was less than impressed by the natural land bridge I saw.  We were just ready to get home to a nice plate of hot food. No more peanut butter sandwiches for me!
one of the views 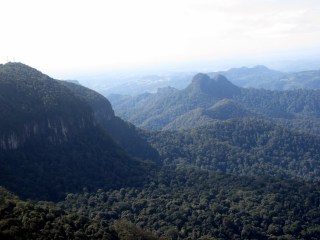 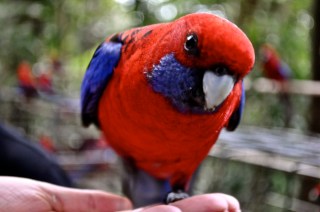 ADVENTURE #3: Ekka
Wednesday August 17, 2011
America, you have Labor Day.  Brisbane, you have Ekka. The score stands at Australia: 2 America: 0.  Ekka, or the Royal Queensland Show, is a public holiday held on a Wednesday that hosts agricultural events and, most importantly, a day of horse racing.  Uni students have taken it upon themselves to begin the tradition of waking up at ungodly hours of the morning and drinking the infamous goon.  A few kids in my block decided for Union College that Boom Boom Boom Boom by Vengaboys would be the best wakeup call.  But what is this goon you speak of? Goon [noun]: the shittiest, cheapest, most hated and most beloved alcoholic beverage of poor uni students.  At ten dollars a box, even my wallet is happy.  It’s so cheap the Australian government has promised to combat “alcoholism” by tripling the price of a goon sack.  Lucky for me, I’ll be long gone before that plan goes into effect.  After breakfast, a fair amount of skulling, and playing dress up we were off!  Lucky for us transportation was provided to the event.  Not so lucky were my bets on the races.  Don’t worry dad, I didn’t bet any money.  You raised me well.  Masses of people everywhere were dressed up to the nines and between races I spent most of my time absorbing, and yeah okay maybe judging, the sometimes extreme fashion choices of my peers.  As a horse enthusiast, I was excited just to be near one since it’s been over two months since I’ve seen a horse.  Since we’d sobered up quite early on in the day, we left the grounds in the arvo (look at me with my fancy ozzie terms!) and ran around the city.  Why yes, heels were a bad choice.  Especially when you see the 412 waiting at the bus stop and it becomes your main mission in life to catch it.  The next bus doesn’t come for a whopping ten whole minutes!  Every moment is precious.  All in all, a brilliant Wednesday spent not in class.
me, Tori, and Taylor looking classy for the races 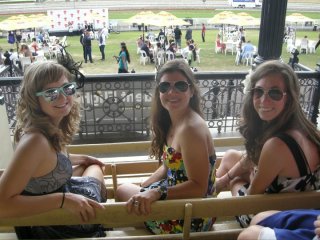 ADVENTURE #4: Brisbane Forest Park
Friday August 19, 2011
Remember those field trips I was talking about? This is the first of three! With another early start and dodgy bus ride, we made it to the park where we saw some badass animals.  Ever seen a platypus? I have. Already crossed that one off my bucket list.  I remember the actual animal as really awkward and ugly.  Just like a dating website, you have to remember they never look quite like the pictures you see.  I also finally saw my first kangaroo but only for a quick second before we were whisked off to our next location.  We sat on top of Mt. Jolly (… all covered in cheese) and had a lecture about the different types of rocks and soils around Brisbane.  Coolest. Lecture. Ever.  Correction: Coolest. Lecture. Location. Ever. After we scribbled down some vague answers for our packet we went on a nature hike through a sclerophyll forest and a rainforest learning about the different types of plants in each.  Fun fact: Australia is the largest commercial manufacturer of macadamias.  I wasn’t surprised since I always end up finding out my ice cream is not actually vanilla.  The field trip was fun because we got to apply what we learned in class, and we got credit for it.  I wonder why Purdue doesn’t have a class like that.  Oh wait… we’re in the middle of nowhere.
Even trying to condense these trips, I’ve already written way too much.  So far I’m missing a few adventures but I’ll be sure to write about them soon!  This weekend is another field trip, celebrating a friend’s 21st, and a 5k run early the next morning.  Here’s to more good times to come and lots of blog posts to follow!
Cheers,
Lena

One thought on “adventuress extraordinaire”